For months, and after searching Pinterest for many different ideas, I have been dreaming of setting up a little coffee and tea station in our new home. I have played with many different options...and voila! Here we have it! 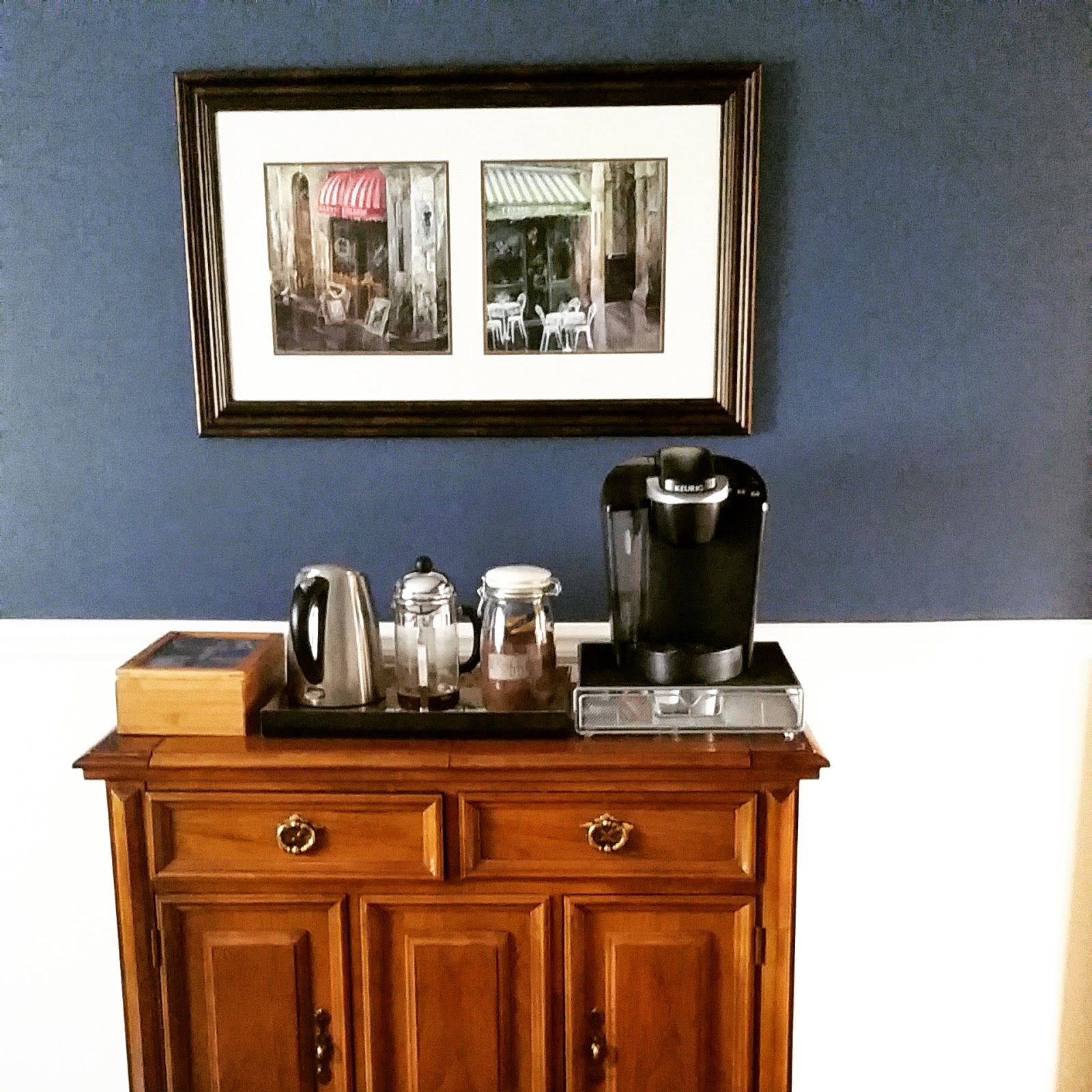 What do you think? I absolutely love it! The best part about this little station, is how easily and inexpensively it came about. It started with a trip to Home Goods, where I picked up a lovely (and perfect) tray for $10 on clearance, as well as a canister that says "coffee" on it. 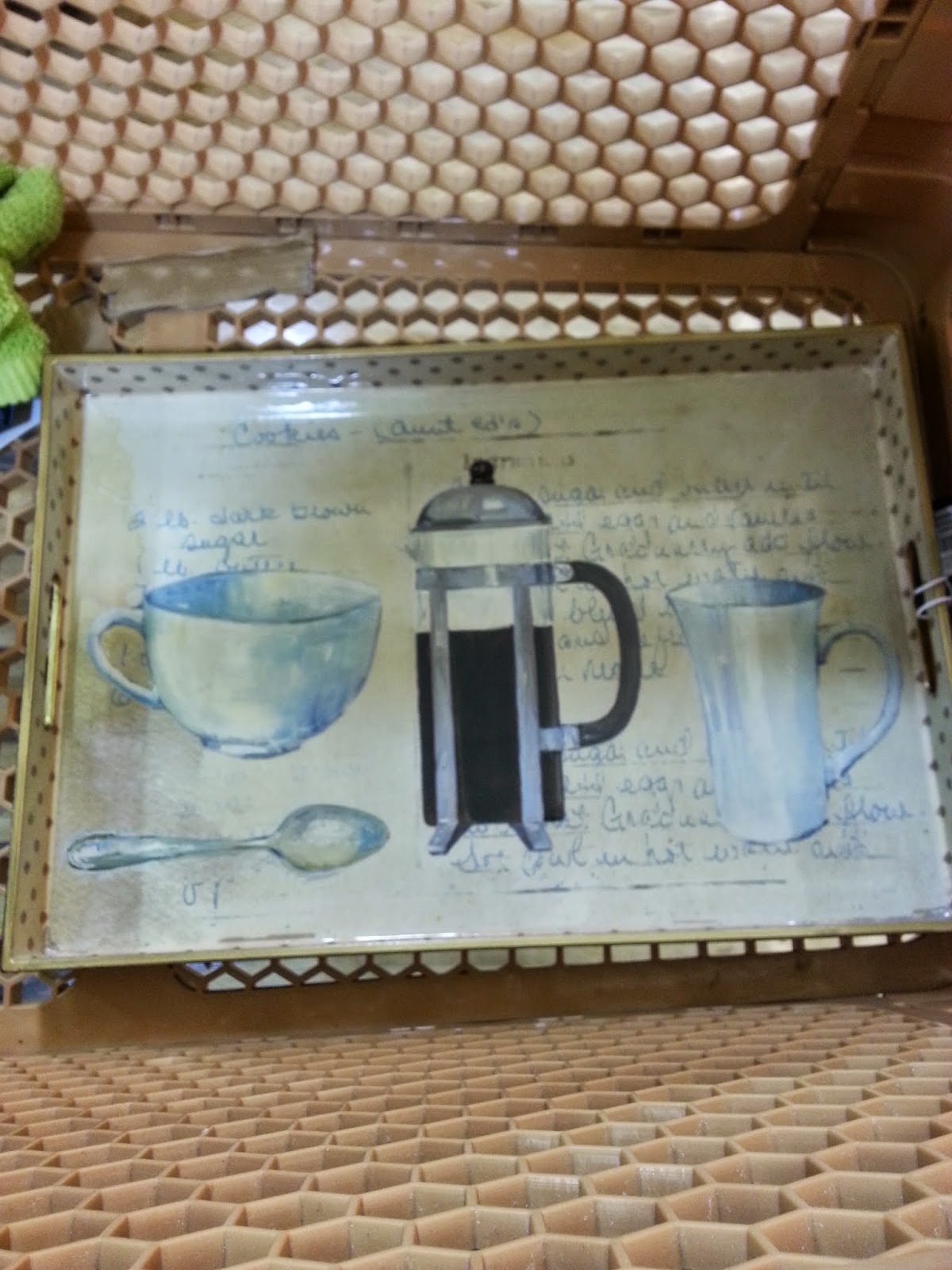 As soon as I got home, I put my necessities on it: the electric kettle, french press, and coffee canister. Originally, I had this little "station" on my kitchen counter. However, it proved to be a bit cluttered all in all, and I wasn't 100% happy with the lost counter space, either.

So, my husband and I together decided that the best place for this station would be in our dining room on an empty buffet top. The best part was, yesterday I took a trip to Burlington Coat Factory, where I found this beautiful picture hanging above the station, on clearance!!! I love clearance sections! It was in perfect shape with nothing wrong with it. I love how this all came together! Now, drinking my morning or afternoon coffee or tea feels so much nicer because it begins with the dining room. And, I have my counter space back. Hooray!
Posted by Katya at 10:57 AM 2 comments:

Breakfast and an Act of Kindness...

After a very exhausting week, our family started out this morning with some homemade french toast with maple syrup. 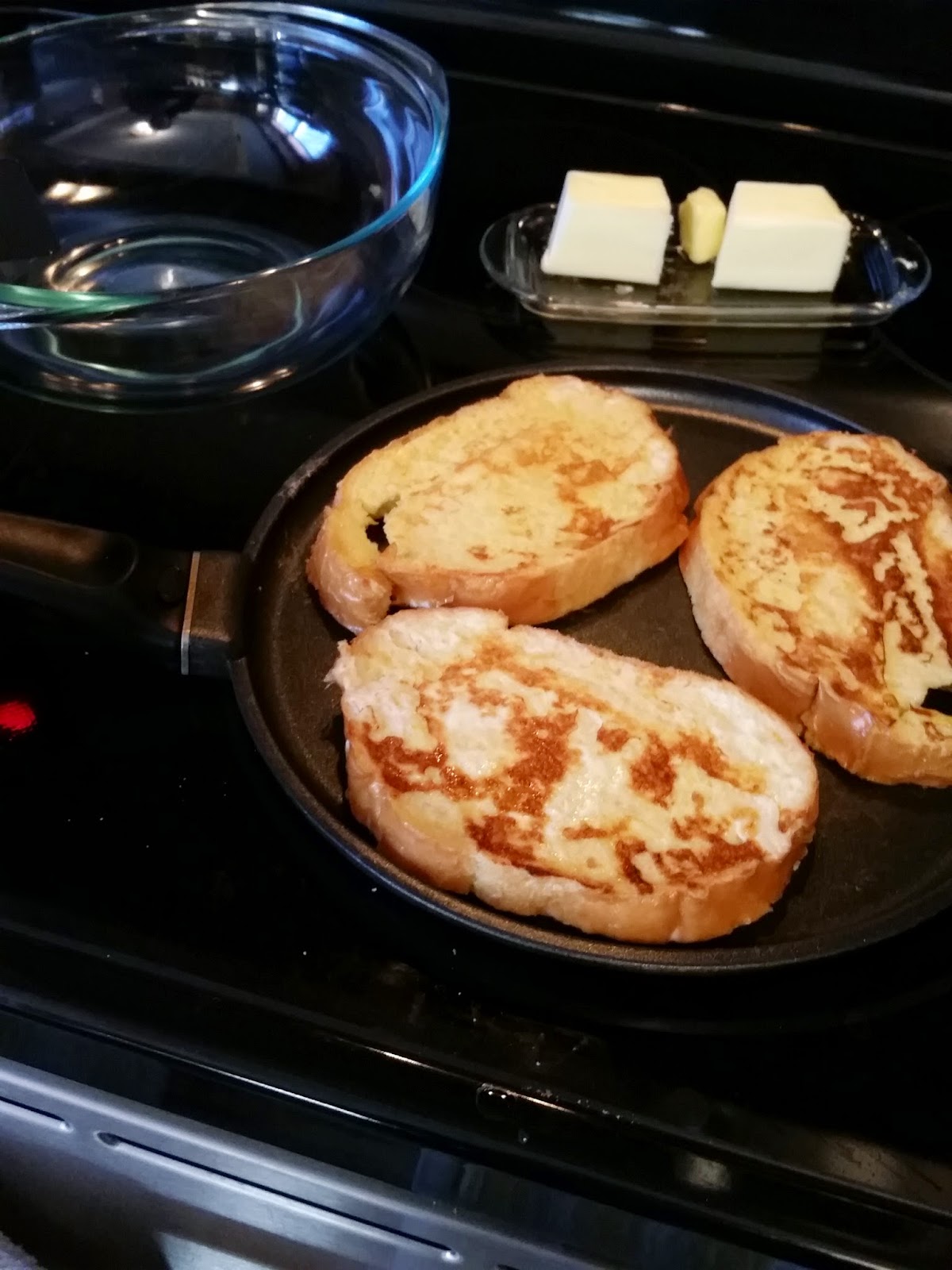 And speaking of breakfast...

On Saturday morning, our family went out to breakfast. A couple we are friends with gave us a gift certificate to a local breakfast joint when we moved here. We have not been out to breakfast since we moved because it was the fast. So on Saturday, we decided to take advantage of the free morning for my hubby, and the gift card from our friends, and over to Crispy Waffle we headed. We took our time ordering and eating, and were really enjoying our family time together. About half way through our meal, the waitress walked up to us and said, "I just wanted you to know that your bill has been taken care of, so you can leave whenever you'd like." We just stared at her in amazement and asked, "what do you mean our bill has been taken care of?" She explained that some other people were sitting having breakfast, eyed our family and enjoyed watching how we interact, and also loved seeing that we were not sitting on any types of devices while out, so they chose to pay for our meal. We were so touched and incredibly shocked! What an act of kindness from a group of complete strangers! We felt bad that the people had already left and we couldn't thank them. We sat there and thought about this beautiful random act of kindness. It inspired us, and we also decided to pay for a group of people before walking out the door. We looked around and chose a family that looked like they were also very much enjoying their time together, and used our gift card to pay for that family. It really felt like the right thing to do. What these other people did for us made us feel so amazing, we wanted to do it to someone else, too! Who knows? Maybe those people we chose to pay for also decided to do it for another family. Wouldn't that be cool??
Posted by Katya at 8:17 AM No comments: 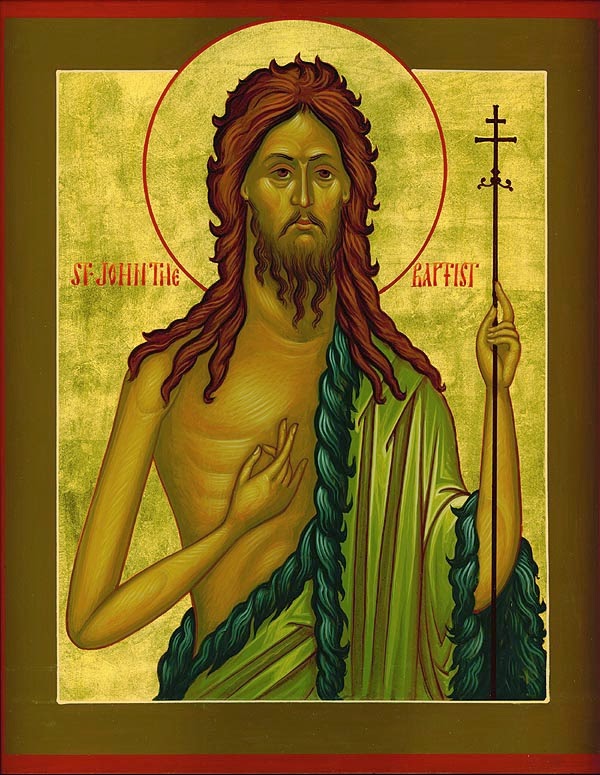 Our family celebrated our slava this week (ours is St. John the Baptist). As a little background, each Serbian family has a patron saint for their family, and this saint is their slava saint. On the day of the year when this saint's feast day is celebrated, the family celebrates their slava. It is the most important day of the year for the Serbian family (and most celebrate not just one day, but three). So much work goes into preparing for your slava! Each family bakes a kolac, which is the traditional slava bread, and is used to remember and commemorate the living members of the family. You also make a bowl of wheat (usually it is ground with nuts and sugar mixed in), and decorate it with a cross on top. This wheat is used to commemorate and remember the members of the family who have died. In addition to these two things, a lot of Serbian traditional foods are prepared, and it is never just a one-day affair!

Now, on to the day of slava itself. It is nice for at least a few members of the family to go to church on the morning of their slava (sometimes the housewife stays behind to prepare for the feast at home), and that is just how we started our day...by going to liturgy. Immediately after liturgy, the children and I came home and I prepared for a few parishioners to come over for coffee and lunch. My husband had to go visit the homes of people who did not make it to church that morning, in order to bless their home and serve the slava service, which includes blessing the kolac and zito (the wheat, pronounced zhee-to). He was home only later on in the evening, just after 7. Our evening guests, mostly whom were parishioners, arrived at 7 PM. There were about 25 guests in total that night. It is intimidating to host so many people for a fancy, sit-down meal (at least for this housewife, it was!) Thankfully, everything went pretty smoothly (aside from me burning the soup as I reheated it...which resulted in no soup for the guests. Thank God there was so much other food, though!)

On the morning after our slava, we woke up with completely sore bodies, from head to toe! That's what happens when you host a slava, but I am pretty sure it means you hosted it properly :) Round 2 was last night, but it was a breeze because I served the same food from Tuesday night that was leftover, and it was a group of friends, so it was less overwhelming.

Until next year, slava!

Here are some photos from slava, from prep to go time! 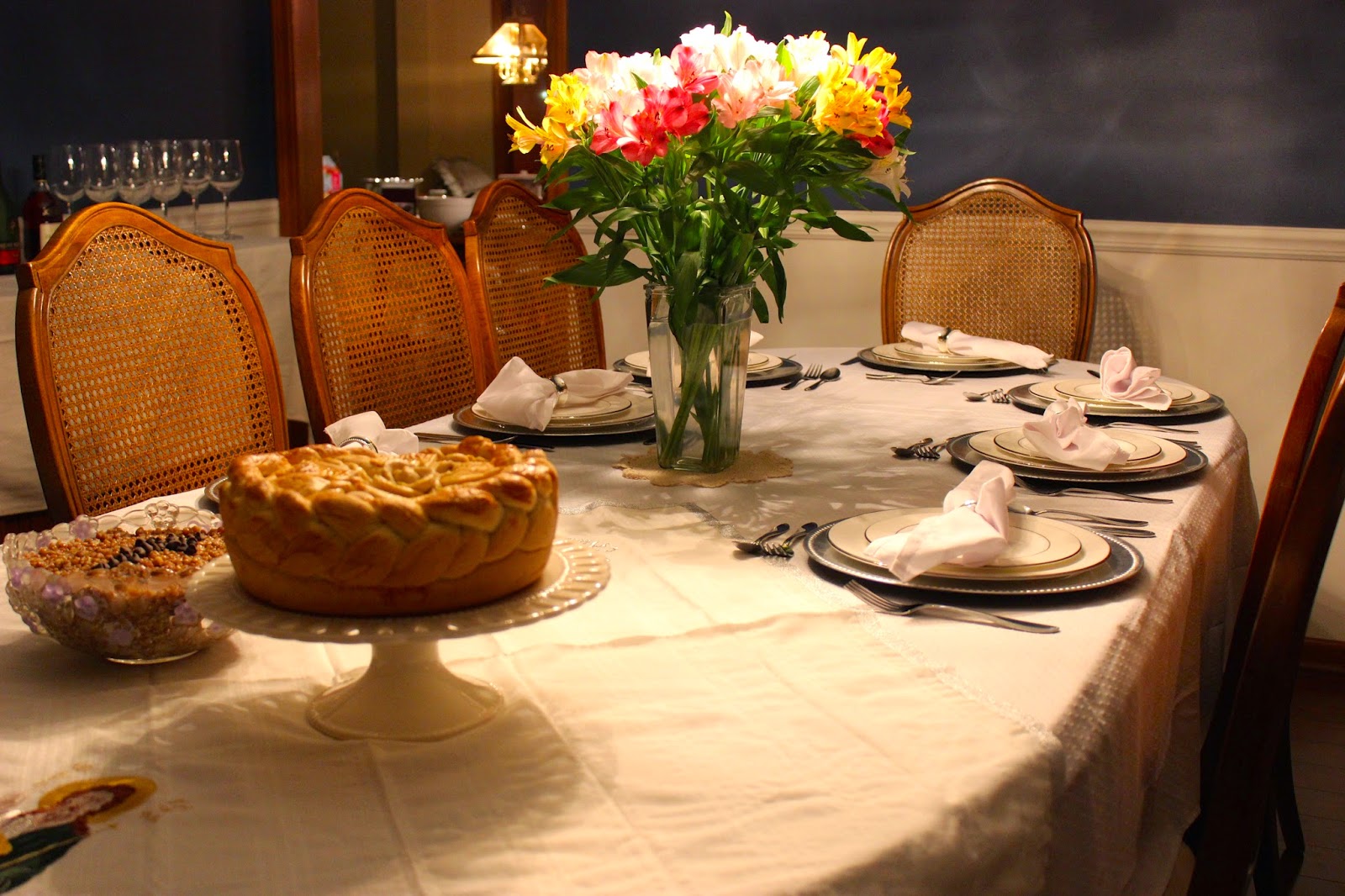 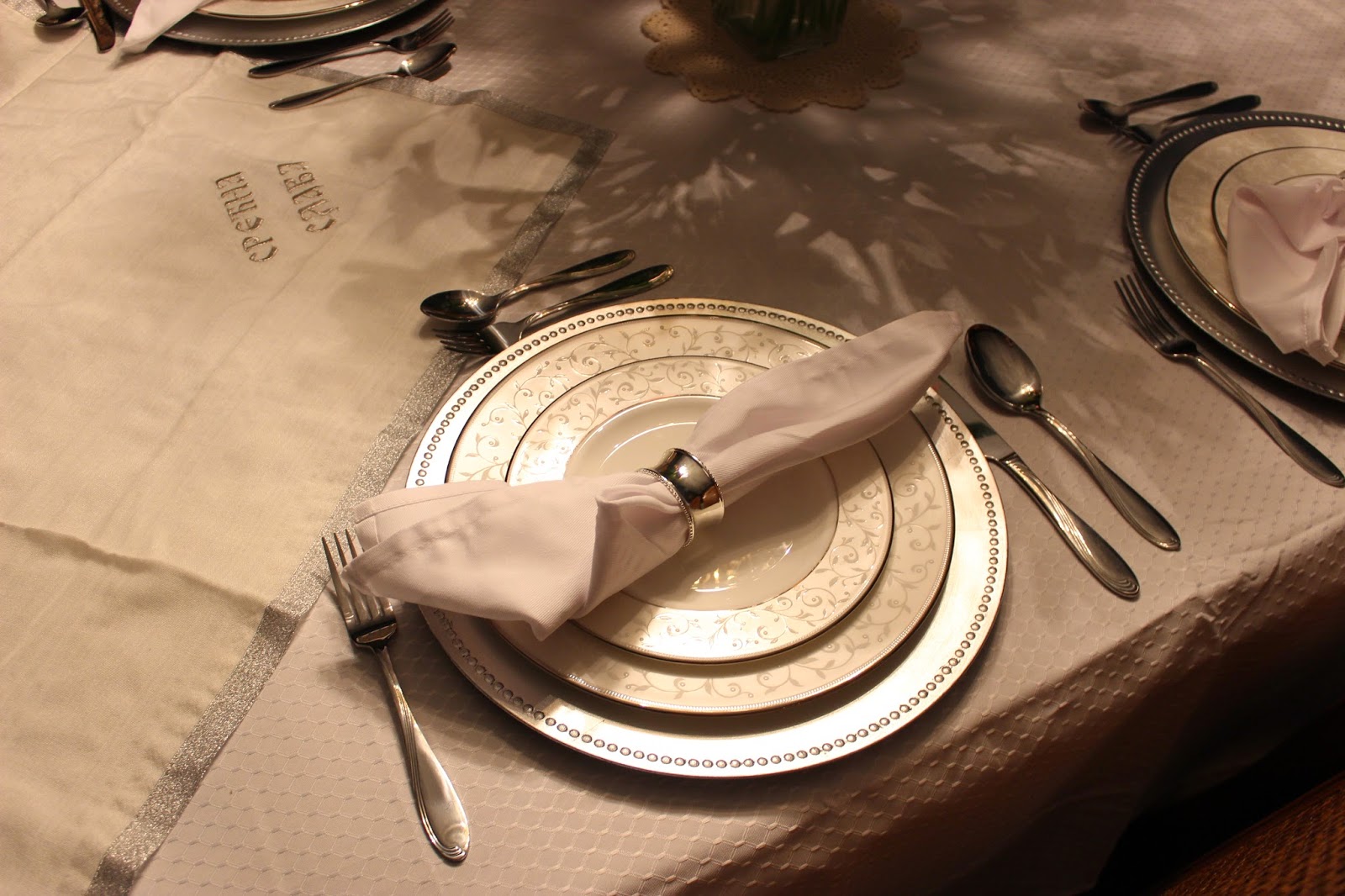 Boy, has it been quite a few weeks! We have moved in to our new home, but then came a slew of new year celebrations, Christmas, Christmas parties, more feast days, and lastly, our family's slava. I have taken a break from just about everything other than housework and prep of all sorts. I'm back, and hope to stay back without any prolonged breaks from here on.

Though we are having company tonight for 3rd day of our slava, and I have lots to do in the kitchen, I  wanted to share this quote that I have now printed and posted on my refrigerator for a daily reminder.


"What saves and makes for good children is the life of the parents in the home. The parents need to become saints in their relations to their children through their mildness, patience, and love. They need to make a new start every day, with a fresh outlook, renewed enthusiasm and love for their children. And the joy that will come to them, the holiness that will visit them, will shower grace on their children. Generally, the parents are to blame for the bad behavior of the children. And their behavior is not improved by reprimands, disciplining, or strictness. If the parents do not pursue a life of holiness and if they don't engage in spiritual struggle, they make great mistakes and transmit the faults they have within them. If the parents do not live a holy life and do not display love towards each other, the devil torments the parents with the reactions of the children. Love, harmony and understanding between parents are what are required for the children. This provides a great sense of security and certainty."